Structure and Replication of DNA

DNA replication occurs during cell division, as both daughter cells require a complete set of genes so chromosomes must replicate.

DNA replication is semi-conservative. the 2 strands are separated by DNA helicase, 2 DNA molecules are then formed as each of the original parent strands act as templates to which free nucleotides join by complementary base pairing.

A multi-enzyme complex is assembled at the ori site, and initiates replication by starting to separate strands and opening up a replication ‘bubble’ with a replication fork at each end. Several important proteins are involved in starting initiating DNA replication. 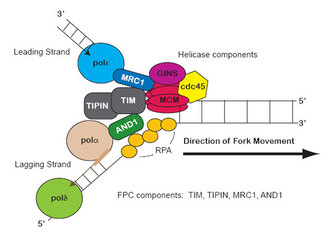 DNA helicases are enzymes that untwist the double helix at the replication forks using ATP. They separate the two parental strands and make them available as template strands.

After the parental strands separate, single-strand binding proteins bind to the unpaired DNA strands, keeping them from re-pairing with each other.

The untwisting of the double helix causes tighter twisting and strain ahead of the replication fork. Topoisomerase helps relieve this strain by breaking, swivelling and re-joining DNA strands. This process is known as negative supercoiling. 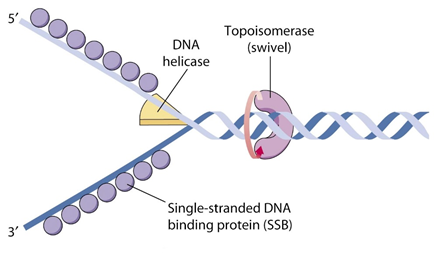 Once the DNA strands have been separated a short piece of primer binds at the starting point of replication, also known as origins of replication. This piece of RNA gets produced by an enzyme known as DNA primase.

The reason a primer is added is because DNA Polymerase can’t synthesize DNA from scratch (de novo). It requires a primer with a 3’ OH end that is already attached to the template strand.

Once this has been added, polymerase can then catalyse the attachment of phosphate groups of the incoming nucleotides to the hydroxyl group of the primer. 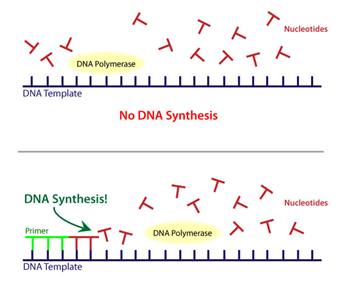 For context, this means DNA on the new strand is synthesised from 5’ to 3’ since DNA is antiparallel and will grow in length in the opposite direction.

The template strand is read 3’ to 5’ since replication starts at that 3’ OH. This means it synthesizes the leading strand continuously.

Polymerase can build a new strand at a speed of about 50 nucleotides per second, per replication fork, which is quite fast, but nothing compared to the speed of bacterial replication (around 1000 nucleotides/s).

Step 3 – Going backwards is a chore

The lagging strand is however read backwards and therefore has to be synthesized piece by piece (the primase lays down several primers).

Okazaki fragments address the issue of synthesizing DNA with a strand that is read from backwards. DNA unzips in the 3’ to 5’ direction of the leading strand. This means it unzips and exposes the lagging strand in the 5’ to 3’ direction.

This isn’t ideal as polymerase can only start at the 3’ OH end of the template strand and move towards the 5’ direction. It NEEDS the free hydroxyl group to work and hence must start from 3’ end of template.

Okazaki fragments are simply a way of reading the template in 3’ to 5’ and synthesizing a new template in 5’ to 3’ direction.

Polymerase has to keep going backwards in loops as the strand unwinds which is why many primers are required (to provide 3’ OH) and hence many fragments generated. 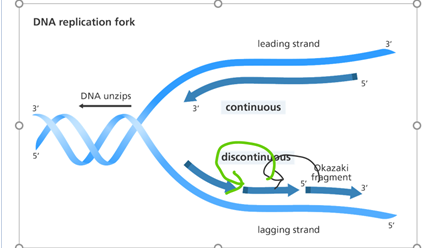 The DNA strand continues to expand and replicate until there is no more template left, or until two replication forks meet.

RNAase H, an endonuclease enzyme is responsible for removing the RNA primer that is present at the beginning of each okazaki fragment.

DNA Ligase is recruited to ligate the fragments where RNA primers were occupying, so now there is a continuous DNA strand.

Now you have two new strands, where half of each strand comes from the original DNA template. This is why the process is known as semi-conservative replication.

All that’s left is proof-reading to check the DNA for any errors in replication. This is done intrinsically within the cell cycle.

The cell membrane is the biological barrier between the inside and outside of the cell.

It houses organelles that allow cells to carry out their functions.

Protein synthesis is the addition of amino acid residues to form polypeptide chains. These amino acids are linked by peptide bonds, beginning at the N-terminus and ending at the C-terminus.

Like most organisms, cells follow a lifecycle of cell growth, cell “living”, and cell death. Most cells spend their lifecycle in the living phase called interphase where the cell grows, synthesises DNA and carries out normal cell functions. The cell undergoes mitosis/meiosis when it leaves interphase, and if certain checkpoints aren’t passed, cell death is triggered.

From the second a sperm cell reaches the egg, certain steps are set in motion to create an embryo. The single-celled fertilised egg magically becomes a multicellular living organism. It’s not magic, it’s painstaking cell divisions done in an extremely controlled and precise manner. It’s biology!

What even is inheritance? Who is this Mendel chap? How did he know so much in ancient monk times and which of his findings hold up?

Spoiler alert, all of them. There is however such a thing as a non-Mendelian inheritance which we can explore.